Who is Harriet Tubman? 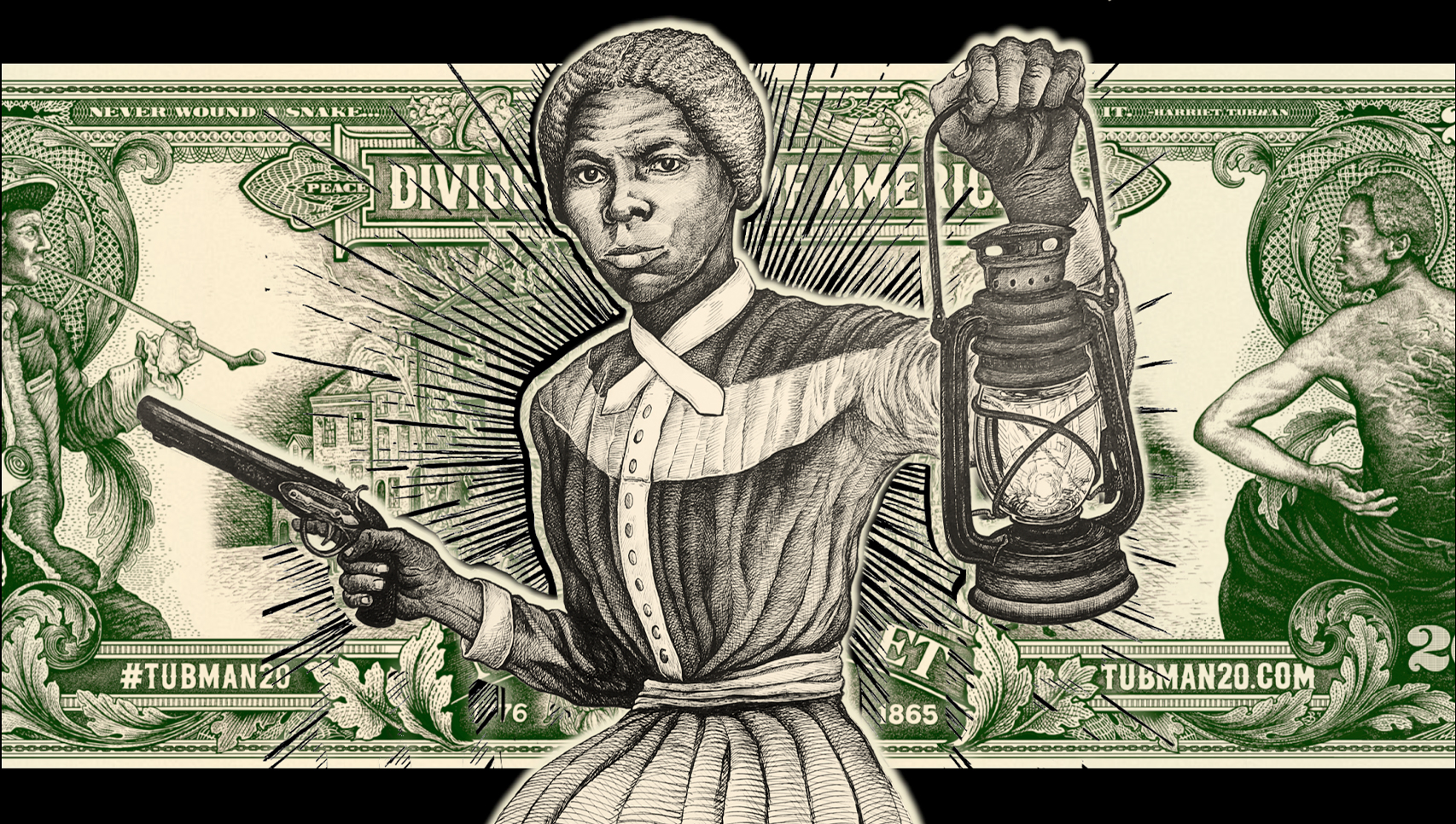 One of the most remarkable women in American history, Harriet Tubman was born into slavery in Dorchester County, Maryland in 1822. Harriet (born Araminta “Minty” Ross) was the fifth of Ben and Rit Greene Ross’ nine children.

As a young child, Harriet worked mostly around the house and taking care of the children of her “owners.” When she was a teenager, she went to work in the fields and swamps catching muskrats and harvesting flax seed. Around the age of 13, her life was forever altered during what began as a routine trip to the store. While inside, an angry slave owner attacked one of his slaves, throwing a two-pound iron weight at him. The weight hit Harriet instead, fracturing her skull. She nearly died and would suffer headaches and intermittent sleeping spells the rest of her life, but was forced back into the field almost immediately. She later would tell a friend that “I went to work again and there I worked with the blood and sweat rolling down my face till I couldn’t see.”

During her childhood three of her older sisters – Linah, Soph, and Mariah Ritty – were sold by their “owner,” Edward Brodess, breaking the Ross family apart. Linah was old enough to already have two children of her own at the time of her sale. Harriet’s brother later recorded Linah as crying out, “Oh my children! My poor children!” as she was being taken away in handcuffs.

Some years later, the Ross family was threatened with further separation when Brodess agreed to sell Harriet’s youngest brother Moses to a “trader” from Georgia. In response, Harriet’s mother hid Moses in the woods and promised Brodess that she would crack the skull of anyone who attempted to purchase her son. Brodess conceded and called off the sale. Her mother’s successful resistance likely inspired Harriet’s future exploits.

Shortly after Brodess’ death in March 1849, Harriet heard rumors that Brodess’ widow, Eliza Ann, was considering selling Harriet and other family members. Having never heard from Linah, Soph, or Mariah Ritty, Harriet’s family feared that sale meant permanent separation. Harriet and her brothers, Ben and Henry, made up their minds to run away.

Their escape failed as Ben and Henry got cold feet. Seeing their names on wanted posters had frightened them and Ben missed his family, having recently become a father. Harriet decided to return with them, but was only home for a few days before taking off once again on her own. This time, she would be successful.

Aided by a local woman and a group of abolitionist Quakers, Harriet successfully made her way to Pennsylvania where she found work as a cook and promptly joined the Philadelphia Anti-Slavery Society, among the most influential in the network of societies. There she encountered influential abolitionists such as William Still who would aid her future endeavors.

A year later, Congress passed the Fugitive Slave Act as part of the Compromise of 1850, making life tremendously more difficult for escaped slaves and prospective runaways. But the law also lit a fire in the hearts of anti-slavery activists, and the blatant tyranny of the law caused many previously apathetic northerners to become more sympathetic to the anti-slavery cause.

Soon after the law was passed, Harriet received word from Maryland that her lost sister’s daughter Kessiah (now Kessiah Bowley) and Kessiah’s two children were on the verge of being sold. With help from Kessiah’s free black husband John Bowley and Harriet’s brother-in-law Tom Tubman, Harriet helped orchestrate the escape. At the auction, John somehow managed to make the winning bid for his wife and children without being identified. Before he was asked to make the payment, John was able to smuggle his family to a nearby safehouse where they laid low for a few days before jumping onto a small boat en route for Baltimore where Harriet and Tom awaited them. A few days later, Harriet guided them safely to freedom in Philadelphia.

The successful rescue of the Bowley family emboldened Harriet to further defiance of the evil Fugitive Slave Act. Three months later, she returned to Maryland to rescue her brother Moses and two other men. They escaped and made their own way to Baltimore where they met up with Harriet and followed her to freedom. With each successful rescue, Harriet gained confidence.

The Moses of Her Generation

Tubman’s successes went relatively under the radar at first, but her connections with Philadelphia abolitionists such as Robert Purvis and James and Lucretia Mott led Harriet to eventually connect with the most prominent members of the movement such as New York Governor (and later Senator) William Seward, Frederick Douglass, and William Lloyd Garrison.

Between rescue missions to Maryland, Harriet would speak at anti-slavery gatherings. She received no formal education as a child, and thus was not necessarily an eloquent speaker in the mold of Douglass or Garrison, but her charisma and sincerity together with her riveting reenactments of her dangerous tales endeared her to Black and white abolitionists alike. Her speaking engagements helped fund her southward journeys and other abolitionist projects, while also causing her legend to grow. Abolitionists spread the word of her triumphs and began referring to her as “Moses.”

During her time working the Underground Railroad, scholars estimate that Harriet made at least 13 journeys to Maryland and led at least 70 Black men, women, and children to free soil, while giving instructions for escape to 50-60 more. Tubman was never caught and successfully rescued everyone she set out to rescue: “I was the conductor of the Underground Railroad for eight years, and I can say what most conductors can’t say — I never ran my train off the track and I never lost a passenger.”

Her perfect record can be attributed both to her extensive planning and knack for calling the right audibles on the fly. When she felt pursuers getting close, she would take a southbound train knowing that slave catchers would expect her to head North or she would break up the group to hide them in various locations before gathering them back together when the coast was clear. Though it was cold, she would operate in the winter when nights were long, people stayed inside, and many enslaved black people were together as families for Christmas.

Those in her care knew that returning to slavery was not an option once they began following Harriet Tubman. If they began the journey, they would know the locations of safe houses, the names of Underground Railroad operatives, and the methods by which Harriet conducted escapes. The return of anyone with this information to their “owners” was an existential threat to the Underground Railroad. When a runaway in her group once suggested returning to the plantation, Harriet pulled out her revolver, pointed it at his head, and told him, “You go on or you die.” He went on, living the rest of his life as a free man in Canada.

In October, 1861, after the war had begun, Harriet was in Boston discussing the developments of the war with anti-slavery friends. Sensing that Harriet was eager to get involved, George and Mary Stearns introduced Harriet to Massachusetts’ new anti-slavery governor John A. Andrew. Andrew was quickly convinced of her potential as a scout and spy, given her experience evading capture in the slave states.

With her knowledge of how to navigate Southern terrain undetected, she led a special forces team operating primarily in South Carolina gathering information about Confederate movements and fortifications. The reconnaissance missions Harriet led were crucial to the Union efforts and the regiments her team worked in tandem with freed hundreds of enslaved Black people as they took ground in South Carolina. Her exploits as a spy were covered in Northern newspapers, further heightening Harriet’s profile as one of the heroes of her generation.

After the war, Harriet moved back to Auburn, New York where she lived in a home purchased from her old friend William Seward surrounded by friends and family. It was there she met and married farmer and Civil War veteran Nelson Davis, with whom she adopted a daughter, Gertie Davis.

Fighting for the Vote

Leaders in the early women’s movement – many of whom were abolitionists such as Lucretia Mott and Susan B. Anthony who had long admired Harriet – offered her speaking opportunities at their gatherings in Boston, New York, and D.C. With her quaint charm and heroic tales, she quickly became as beloved among suffragettes as she was among abolitionists.

While Harriet didn’t live to see the passage of the 19th amendment, she helped to popularize the movement which ensured women gained the right to vote.

Harriet Tubman represents the best of America. Chattel slavery and the kidnapping, torture, and rape that accompanied it are as monstrous a crime against humanity as can be imagined, yet Harriet spent more than a decade of her life journeying into its domain to rescue people out of it. As Rebecca Price Janney wrote of Harriet, “No fear of the lash, the bloodhound, or the fiery stake, could divert her from her self-imposed task of leading as many as possible of her people ‘from the land of Egypt, from the house of bondage.’” Her willingness to risk her life time and time again in the service bringing freedom to the oppressed makes her an American hero in the truest sense.

Her story reminds us of our duty to our fellow human beings. Slavery is among the most heinous of evils, but its abolition did not bring an end to all oppression. There is work yet to do. Be inspired by Harriet as we fight state-sanctioned violence in our day.